… although it wasn’t decided neither confirmed we managed to have a free Friday and have a long weekend in Pontresina very near to St. Moritz. We had taken into consideration going to Liguria, to the seaside, but the weather forecast was announcing rain for Saturday and Sunday, so we opted for the mountains.

The Hotel we decided to stay is called “Hotel Schloss”: it is quite nice, the SPA, the pool as well as the rooms are new and definitely welcoming. We even tried the different kinds of saunas which I usually avoid since I don’t like walking through the hotel wearing a bathrobe and meeting other guests in the lift wearing usual clothes reciprocally exchanging stupefied looks. It promptly happened. There is another ground why I often avoid the SPAs and saunas: it is the naked thing. I understand that it should be done this way, and, although I did try to have a sauna and obediently left my towel out and after a while I noticed that it wasn’t that embarrassing anymore, at the beginning I always have to make an effort to overwhelm myself. Do I really need to do that?

The funny thing is, that this time, I finished being in a warm water pool were everyone was supposed to be naked, but no one was: beside me! I had a laugh at myself and quickly left the pool…

After a quick research on trip advisor we decided to go to the Restaurant called “Sport stüvetta” were we had very good fish: we spent 150.00 CHF, with just one glass of prosecco, water, soup as a starter and a coffee. I’m not shocked , since we know that here everything is expensive, and also because the food was really good as well as the service, still… it is expensive and it is a pity because it would be great to visit that restaurant more often!

We managed to ski both Friday and Saturday: snow was hard and icy, but really fast. So it was fun both for me and my wife.

On Sunday we decided to go for a walk through Val Rosegg.

The walk takes about two hours, it is mainly plain, so, no difficulties at all. At the end of it there is a restaurant/hotel which is quite good, with huge selection of desserts. We have seen that many preferred to use the coach with horses instead of walking…

Once we finished our lunch we just took some pictures at the first European Stupa a structure made mainly by ice and we headed back for our car since we had to slowly realize that our weekend was quickly finishing.

Today I had one more chance to record some random speeding on the snow and on ice! 🙂 The car is the same model as mine, just different colors. Was fun!

And one more! There is also a little drifting moment! 🙂

And the third one, again on the ice!

Together with a friend we just had huge fun taking advantage of some ice and of Kyosho Dirt Hog R/C model! Enjoy the video!

Lugano is waking up: slowly though. Seems like today is going to be a beautiful day!

Beside the magic my curiosity was taken by some intriguing signs in the snow: it really looked like someone had a party on the balcony.

I was so curious I decided to adventure myself in the cold and have a closer look! What kind of animal might it be? 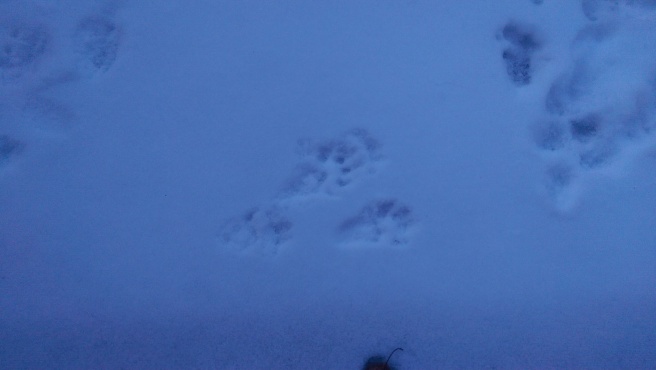 So I decided to go have a walk in the nearby woods and have a look for similar traces! Hereunder a sequence of pictures! Sadly it is not possible, at least for me, to recognise any specific animal since the snow was already partially melt and the traces were not as definite anymore! Still, perhaps the first picture, is quite definite! Was that a cat or… something else?

Damn is it cold! And, it is not even 18:00, but the sky is so dark around me: me walking alone, with winter sport clothing swooshing at each step, a few cars passing by, one or even two passengers standing waiting for their bus. As unwelcoming this may sound it is also so intimate: me, the mountains, a few stars brightly shining and some warmer lights from houses around me. People watching TV, mothers preparing dinner in the kitchen, an older lady knitting… by quickly glancing through their windows I almost felt at home too.

Makes me feel happy! And quickly proceed to the small supermarket to buy the last missing things for our drink…